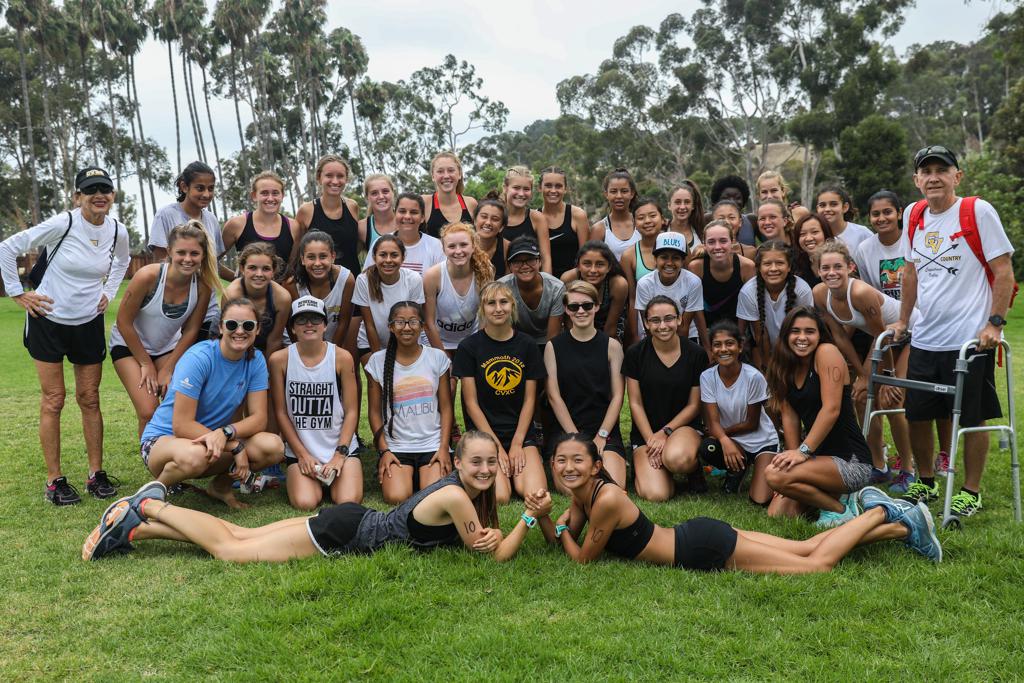 Athletic clearance and physical must be completed by the start of Coach Led summer practice! 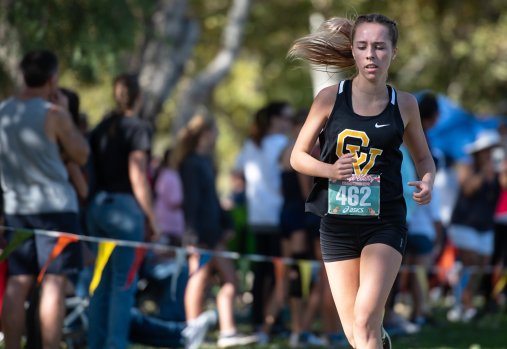 Capistrano Valley’s Carly Corsinita competes in the Girls Sweepstakes race, where she placed 2nd with a time of 17:11.0, during the annual Orange County Championships at Oak Canyon Park on Saturday, October 19, 2019. (Photo By Jeff Antenore, Contributing Photographer)

Runner of the Year: Carly Corsinita

Notable: She finished fifth in the CIF-Southern Section Division 2 championships with a time of 17 minutes, 10.3 seconds, the fastest time of any Orange County girls runner in the CIF-SS Finals. … Corsinita was South Coast League champion. … She signed with Oregon.

Season recap: Corsinita was an outstanding runner all season, starting with her victory in the Division 2 race at the Laguna Hills Invitational in September.

But it wasn’t until December, at the Foot Locker West Regionals at Mt. SAC, that Corsinita felt like an outstanding runner.

“I went in there with a different mindset,” she said, “and I was able to keep up with girls I didn’t think I could keep up with.”

Competing in an elite field, Corsinita ran the 5K race in 17:10.2 and finished seventh.

That capped a great season for Corsinita, who is the Register’s Orange County girls cross country athlete of the year.

Her season was better than she expected. Corsinita rehabbed all summer from a painful foot injury.

“I bounced back by the Clovis Invitational with a strong performance (she finished 10th in the meet’s elite race at 17:49.9),” she said, “and I ran well at the Orange County Championships (finishing second to San Clemente standout Hana Catsimanes). I ran well on courses that I usually find difficult, the ones with hills and tough terrain, and I was happy with the way I handled those.”

Cross country is mostly an individual sport with some team aspects to it. For Corsinita, the team aspects were among the more enjoyable aspects of the 2019 season.

“Our team has never been closer,” she said. “We all spent so much time together and that helps us become more of a team and more unified.”

The extra preparation paid off.

Corsinita took the lead early and went on to win the girls Division 2 Senior race in 18 minutes, 59.4 seconds, which was 22 seconds ahead of second-place finisher Katie Farr of Foothill.

“I know this course is not one to mess around with,” said Corsinita, who finished second at the invitational last year. “The hills, the terrain, the fact that the hill is not an asphalt hill. It’s definitely rocky. There are plenty of variables there.”

One variable was the temperature, which was well above 90 degrees for the junior and senior races that took place later in the morning, keeping times a bit slower than usual.

“It’s a good, fair race course,” St. Margaret’s coach Pat Ben Bendzick said. “You go to places like Woodbridge and Cool Breeze (invitationals) and they’re just artificially fast. So the kids need a little bit of a reality check . . . It’s a little bit of precursor to Mt. SAC and Clovis for us.”

The Tartans are the defending CIF SS Division 5 champions and Division 5 state champions, but they have lost some of their top runners to graduation. Two top-tier runners, Jackson Adelman and Calvin Capelle, are back, and they finished first and second, respectively, in the boys Division 3 Junior race.

“When we split up into age groups, we don’t have a ton of depth,” Bendzick said. “But our kids are winning their division races, and when you piece it all together, that varsity seven looked pretty strong for us today.”

“It was challenging,” said Palacios, who won at Laguna Hills for the second year in a row. “I wasn’t as prepared as last year. I just had to focus on the team. It wasn’t about me anymore.”

An injury prevented Aliso Niguel’s Emily Richards from finishing her race at Laguna Hills in 2018, but Richards won the girls Division 1 Junior race Saturday in 18:43.5.

“I just wanted to get out fast and hold my position, and if anyone came up, I was just going to try and kick in and stay in the front and keep pushing,” said Richards, who also won at Laguna Hills as a freshman. “I take a lot better care of my body … icing and rolling and watching my mileage. I’m really looking forward to having a great season.”

Notes: State ranked number one, Claremont, executed their plan perfectly as they won the team title. Third place team, the unranked Knights of San Marcos High School caught a little bit of the Riverside magic and qualified for state, upsetting several ranked teams in the process. The once national powerhouse, Saugus had tied Channel Islands 219-219 for the final state qualifying spot. Luckily for the Centurions, they won the tiebreaker that used both teams #6 runner. Individually, unranked Elizabeth Chittenden and #3 ranked Erica Schroeder engaged in a sprint finish over the final 50 meters with Chittenden prevailing, taking home the individual title. Alyssa Bautista, who usually is the second part of Capo Valley's 1-2 punch ended up besting teammate Haley Herberg today and finished 3rd overall, first for the Cougars.

** Note:  For additional calendar dates, click on -> View All and scroll through the Monthly view >> to see October and November. 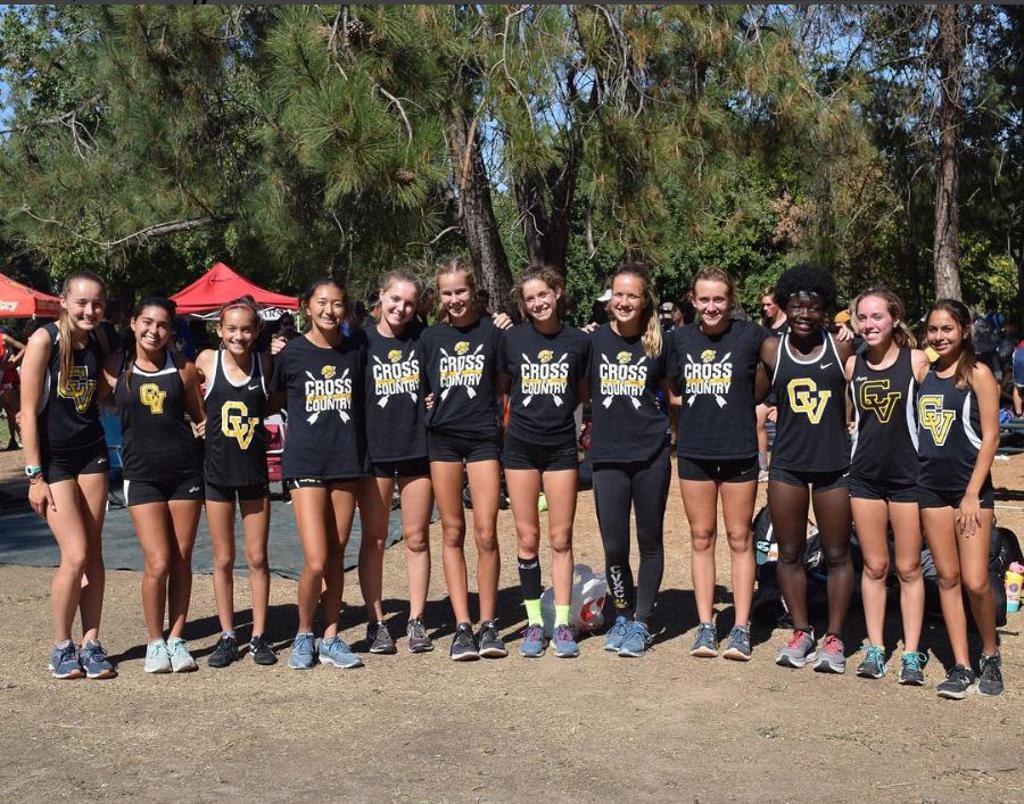 Clovis Recap - Congrats to all 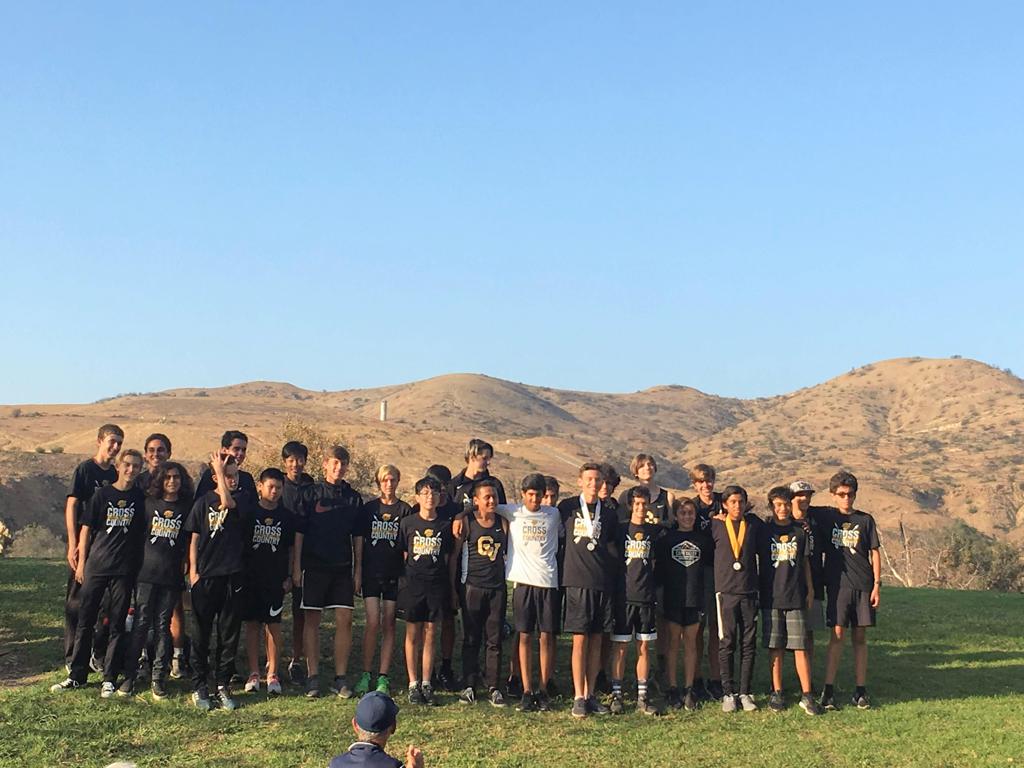 League Finals Recap - Congrats to all 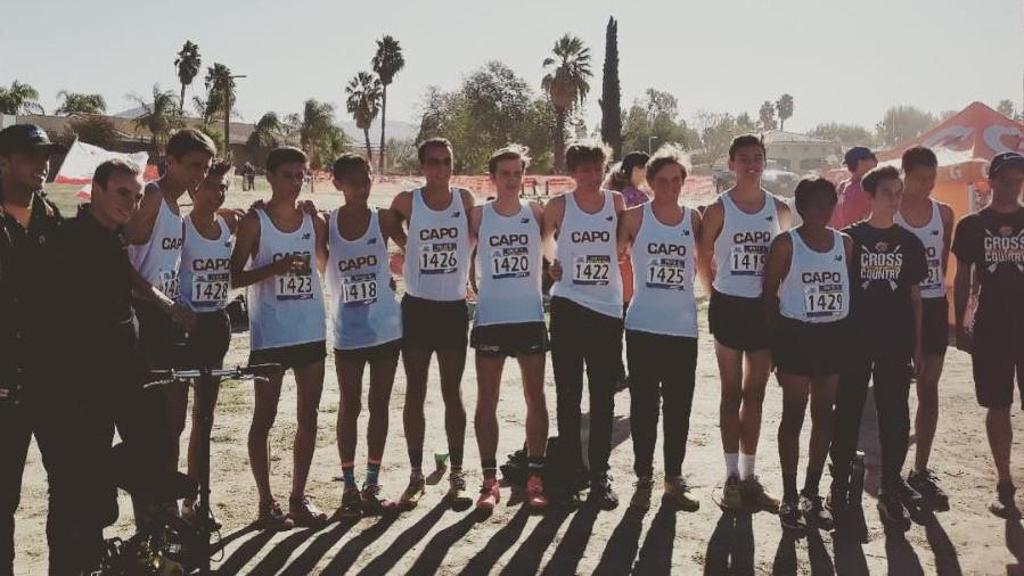 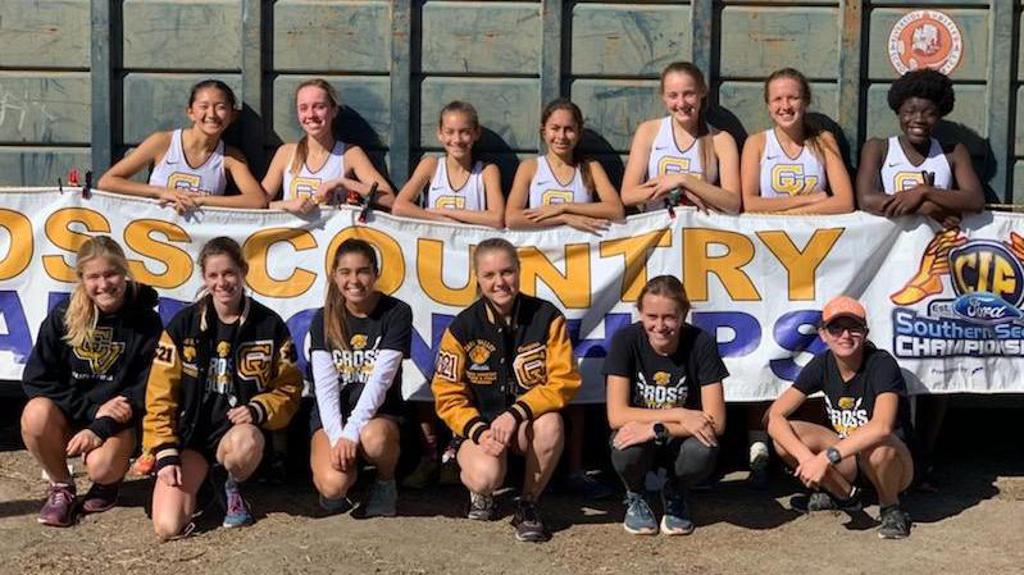 2018 CIF Prelims - 4th in heat and advancing to Finals 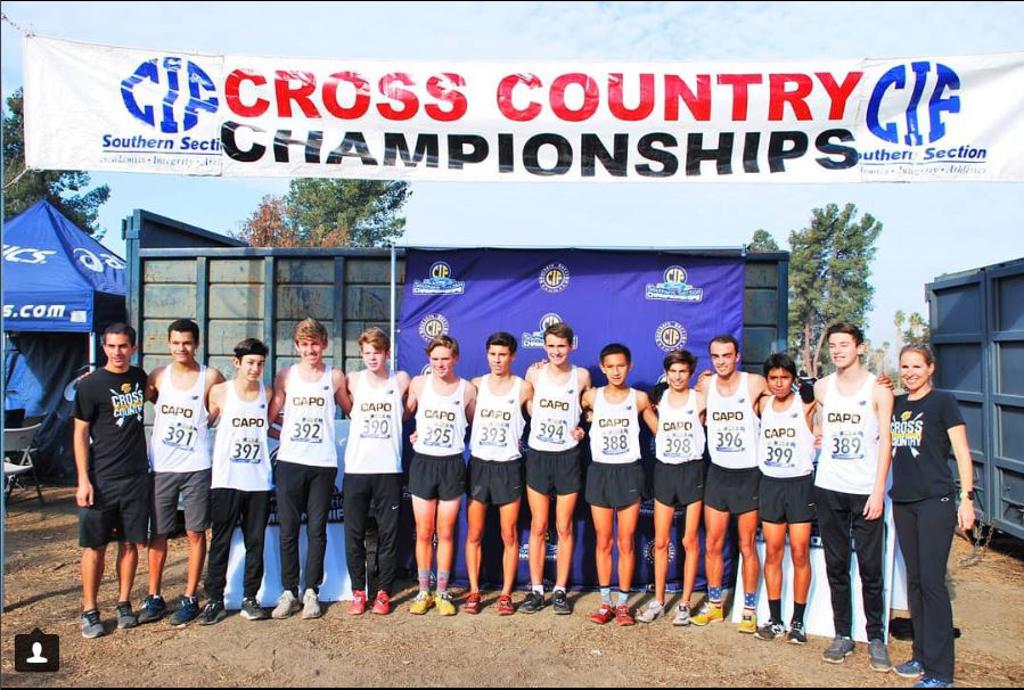 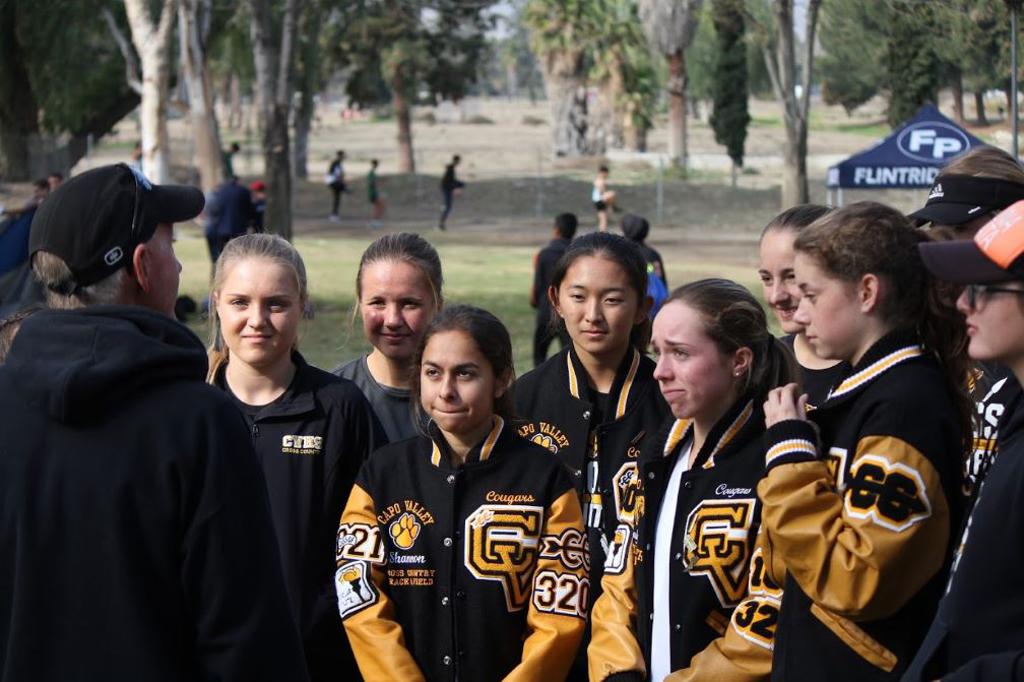 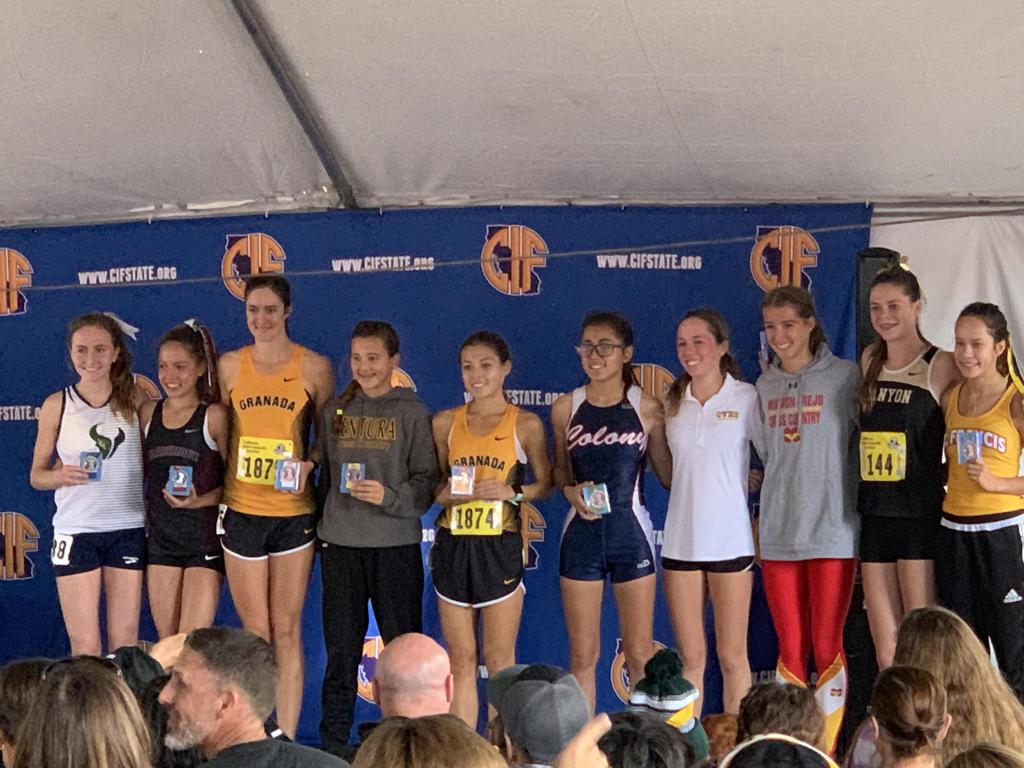