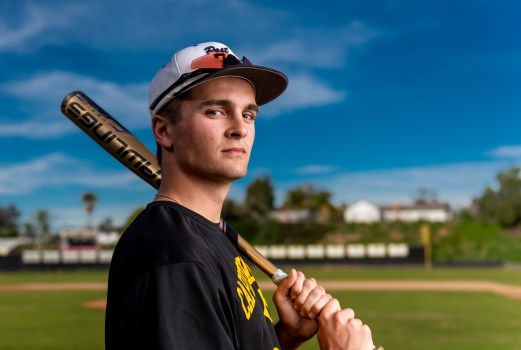 Nathan Manning was an All-CIF quarterback this past fall at Capistrano Valley.

He finished fourth among Orange County quarterbacks in passing yardage, with 3,497. Manning’s 49 touchdown passes were the fourth-most among O.C. quarterbacks. He helped the Cougars reach the CIF-Southern Section Division 3 semifinals.

And he signed with Cal as a baseball player. Manning was All-CIF in baseball, too, as an outfielder last spring. He was a key contributor as Capistrano Valley won the CIF-SS Division 1 championship, perhaps the most-challenging championship to win in CIF team sports.

He said it’s difficult to choose if baseball or football is his favorite sport.

“I guess I have to say it’s the sport I’m going to play in college,” Manning said.

Manning figures the Cougars will be just fine in 2019.

“We do have a lot of new players,” Manning said. “But I also think we have a ton of talent. The only thing we’re really lacking is experience.”

Nathan’s father Tim was a terrific athlete at Trabuco Hills. Tim was best known as a defensive back – his 23 career interceptions is No. 2 in county football history – and also was the quarterback on Trabuco Hills’ 1989 CIF-SS championship team. Tim, a fine basketball player, too, went to Cal on a football scholarship.

Nathan started going to Cal athletic events before he was in kindergarten.

“I’ve been around there my whole life,” he said. “When I was up there for my recruiting visit, they wanted to show me around. I said, ‘No, that’s OK, I’m good.’ ”

Nathan said he learned much from his father about the mental side of sports.

“’Don’t get too high on yourself,’” Nathan said. “He tells me there’s always room to improve no matter what success you’ve had.”

Manning has had plenty of sports success with perhaps more to come this baseball season.

• In addition to the coaching change at Capistrano Valley is this notable one: Burt Call, whose contract was not renewed at Mater Dei after last season, is the new coach at Villa Park. Former Saddleback Vallley Christian coach Richard Mercardo, a Mater Dei alum, replaced Call at Mater Dei. …

• The Newport Elks and Loara tournaments, annually the biggest early-season tournaments in county baseball, begin Thursday, Feb. 14. Weather permitting, of course … and the weather has not done much permitting since the CIF-SS season officially opened Saturday. …

• The Bora Classic’s Southern California tournament begins March 26 at host schools JSerra and Mater Dei. Among the teams in it are La Mirada, the No. 4 team in CalHiSports.com’s California preseason top 25, Cypress, Huntington Beach and Orange Lutheran. …

• The season started early, and so will the CIF-SS playoffs. They begin with wild card-round games April 30 and May 1. The CIF-SS finals are May 17 and 18 at sites to be determined. …