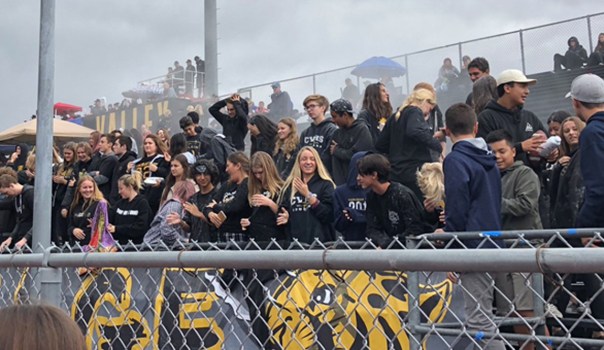 Well, that was different.

Games started and stopped, or didn’t start at all … and then everyone had to come back the next day and try to do it again.

Week 8 was not an easy test for the Orange County Student Sections. But no surprise — we still saw some sections that refused to be stopped by Mother Nature.

Let’s take a look at our nominees and pick the winner of the OCVarsity Student Section of the Week.

The Hawks Nest was ready to go Friday and they looked promising, but Mother Nature threw them a challenge with all of the rain and lightning.

Challenge accepted. The Hawks Nest did their best and showed their school spirit despite the 28-10 loss to El Dorado on Saturday.

Los Locos gets the ‘What could have been’ award. Everything was looking great with the Sunset League title on the line, but the lightning and thunder matched the Los Locos intensity.

The game was eventually declared over a 7-7 tie between Los Alamitos and Corona del Mar.

You get the feeling that Los Locos would have won this week had it not been for the weather. Don’t worry Los Locos, we see you.

The Eagles Nest avoided the rain and the what not by playing Thursday. They had a packed house and the student section rocked their whites in a big game against Servite.

Despite the 30-23 loss to the Friars, the Eagles Nest was on point and was just as wacky as their counterpart. The Eagles Nest knows how to throw a party in the stands.

The Black Pack brought their group of students on the road for part two of their matchup against Yorba Linda.

The Black Pack went in small numbers, but still brought in the noise and apparently the funk in Villa Park 35-14 victory over the Mustangs.

AND THE WINNER IS … THE CAPO VALLEY CAGE

The Cage took the OCVarsity Student Section of the Week award in Week Zero and are back late in the season with another title.

The Cage, like many student sections, came back for a second day and probably had the most students show up to a game. Not only that, but it was a Saturday morning — when every cartoon is on TV. To miss Tom & Jerry so you can cheer on your team is very impressive.

On top of missing the Looney Tunes, they went in and rocked the baby powder, which is always great when it’s not wet, but it was, so I’m sure the baby powder stuck around afterwards. The Cage still did it.

Despite the tough 35-26 loss to San Clemente, The Cage stood strong with their team.

The Capo Valley Cage is back on top as the Week 8 OCVarsity Student Section of the Week.

For the second time this season, The Cage has been rattled.