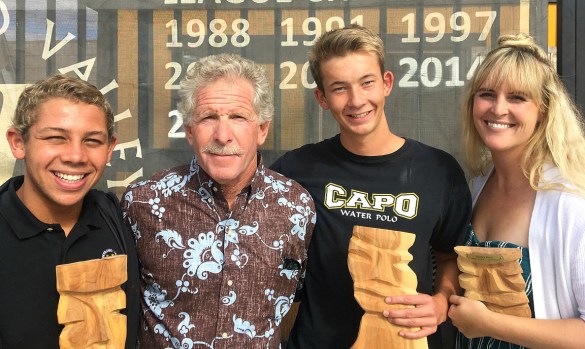 MISSION VIEJO The gravity of the moment started to affect Capistrano Valley teacher Kendra Yancey. She felt scared the coaching legend and longtime family friend who she rushed to aid was going to die on the pool deck.

But the 30-year-old, former athletic trainer knew someone close by who could calmly provide expert care.

On that July day in Hawaii, Yancey urgently summoned Capistrano Valley water polo player Julien Coco, a seasonal lifeguard and one of her former students who was in the middle of a match at the pool.

Coco soon called his teammate and fellow senior Jason Seitz, also a lifeguard, to assist him in caring for struggling Coronado coach Randy Burgess on the pool deck.

“It kind of hit me because I’ve know Randy my whole life,” Yancey recalled this week. “I kind of had this moment. I’ll never forget it where I was like, ‘Oh, my God, this is Randy.’ Randy could be dying right now.

“And I sort of had an issue and that’s when I called Julien over.”

Coco and Seitz, both 17, assisted in the care of Burgess and teamed with coaches and paramedics to save the life of the 60-year-old coach, who suffered ventricular tachycardia or a potentially dangerous type of rapid heart beat.

“People call them heroes and they really are,” said Burgess, who visited Capistrano Valley on Tuesday. “But to them, I guarantee you, they’re not heroes. They just did what they had to do. … I’m here because everything lined up.”

Coco and Seitz were at the pool with Burgess preparing for a summer tournament. Yancey assisted coaching the Capistrano Valley team led by her father, Steve.

Near halftime of a scrimmage, Kendra Yancey noticed Burgess in distress and assisted Coronado coach Sean Castillo as a first responder. She then quickly thought of Coco’s credentials.

He became an ocean lifeguard for the city of San Clemente earlier in the summer. He also was known for growing from an inexperienced freshmen water polo player to a two-year varsity starter. She wanted his helped immediately.

“I just jump out of the water and look and see Randy on the pool deck,” Coco recalled. “I just go into rescue mode and trying to do everything to preserve life.”

Seitz had worked the past two years as a lifeguard at Lake Mission Viejo. He became an ally for Coco.

“In lifeguarding, it’s always good to have a partner with you,” Seitz said. “You always need a partner in CPR and (Coco) knew I was the guy to do that.”

The coach was conscious but then seemed to slip unconscious at the pool, which was equipped with an automated external defibrillator.

The boys decided to turn Burgess on his side, a rescue position they learned during lifeguarding.

“His face was getting really pale and he started going blue almost,” Coco said of Burgess. “We also kind of noticed that he was starting to dry-heave and gasp for air … He was coughing. I thought he might have thrown up because it looked like he had seizure almost.

“I was like, ‘We need to put him on to his side right now, so if he does throw up, he can get that out of his system and he can start getting breaths back in.”

The paramedics arrived within about seven minutes, the boys said.

“The adrenaline just kind of kicked in,” Seitz said. “Your mindset completely changes like, ‘I’m going to rescue this man.’ It’s crazy.”

Burgess said he briefly suffered cardiac arrest during the episode and received a defibrillator paddle in the ambulance en route to the hospital. The 16-time CIF champion has recovered but he hasn’t forgotten his first responders from Capistrano Valley.

Earlier this week, Burgess visited Coco, Seitz and Yancey at Capistrano Valley to thank them and watch the boys play against Mission Viejo.

But the boys also received something else from the experience.

“I don’t think there’s anything better than being able to help someone out in their time of need,” Coco said. “There’s nothing more gratifying.”