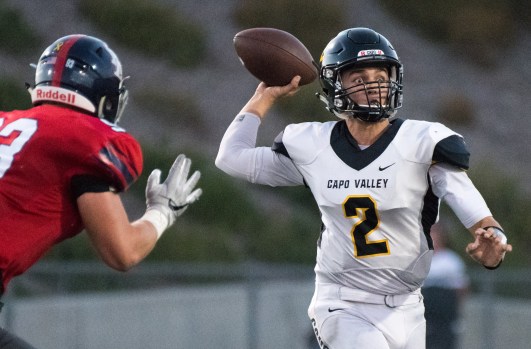 Quarterback Nathan Manning passed for 303 yards and three touchdowns – raising his season total to 18 – and the Cougars’ special teams chipped in a score to help No. 11 Capistrano Valley improve its record to 4-0 with a 28-14 victory.

No. 17 Yorba Linda (2-1) forced four turnovers, including two defensive touchdowns, to limit the Cougars’ dominance. But Capistrano Valley’s defense was stellar, holding the run-dominated Mustangs to 28 yards on the ground.

“This was the first time we really faced some adversity,” said Capistrano Valley coach Ernie Bucher, whose team had outscored its first three opponents 124-21.

“Happy to get away with a win, but you can’t turn it over four times and sneak out. (Our) defense played fantastic.”

The Cougars sealed the victory by forcing the Mustangs to turn the ball over on downs at the Capistrano Valley 17 with 19 seconds left in the fourth.

Capistrano Valley sprinted to a 21-0 lead in the first half.

The Cougars quickly forced Yorba Linda to punt on its opening possession and William Burks capitalized with a 71-yard punt return along the sideline to give Capistrano Valley a 7-0 lead.

Manning threw his first touchdown on Capistrano Valley’s first possession, connecting with Jack Haley for a 42-yard strike with 5:59 left in the opening period.

In the second quarter, the senior scrambled in the pocket before throwing on the run to Blake Morgan for a 40-yard touchdown and a 21-0 lead.

Early in the second half, Yorba Linda cornerback Luke Gigliotti returned a fumble on a lateral about 30 yards for a score.

Manning responded by driving the Cougars 70 yards for a 9-yard touchdown pass to Jake Meyer to make it 28-7 with 7:31 left in the third.

Yorba Linda hung tough. With about five minutes left in the fourth, linebacker Jacob Cochran returned an interception about 75 yards for a touchdown.

“They’re a good team,” Yorba Linda coach Jeff Bailey said of the Cougars, ranked third in CIF-SS Division 3. “We made it close because we made a couple plays. … This is a game that is great for us because we can grow from it.”