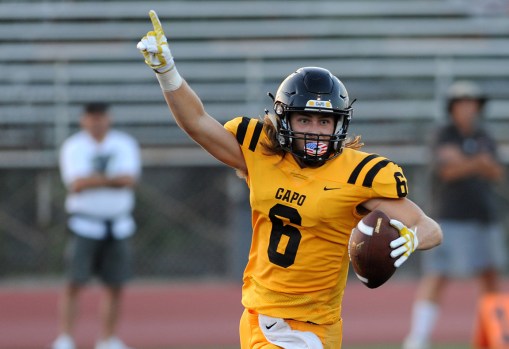 Capistrano Valley football coach Ernie Bucher can ace most questions about his team. Quick: How many transfers do the Cougars have? Hardly any. But there is one intriguing matter that he isn’t quite sure about.

Just how good is his team?

“I don’t know,” he said calmly this week. “We’ll answer that question on a weekly basis.”

Bucher calls the Mustangs the Cougars’ “toughest test so far,” but if Capistrano Valley passes the exam like it did the previous three, that question facing the Cougars will only grow more fascinating.

Are they good enough to contend for the title in the ultra-tough South Coast League?

In South County football, that’s been the question for almost two decades. Can anyone beat Mission Viejo?

Starting with Bob Johnson’s second year coach at Mission Viejo in 2000, the Diablos have lost only twice in the South Coast League, both times to Tesoro, in 2007 and 2008.

But Johnson has retired, replaced by another quarterback guru, Chad Johnson. And the Cougars have their own standout passer in Nathan Manning, a stellar group of wide receivers and linebacker James Giles, a 6-foot-4, 230-pound senior who Bucher said is being under-recruited by colleges.

“We’ll worry about (the South Coast) when we get there,” Bucher said. “I hope we can compete.”

Manning hasn’t played a complete game because of the lopsided scores but has thrown for 902 yards and a county-leading 15 touchdowns in only eight quarters.

Bucher said the senior, committed to Cal for baseball, remains uniquely humble, but the Cougars have reason to be confident.

The Cougars’ defensive line has more than held its own. After graduating dynamic pass rushers Zach Ritner and Nolan Reeve – they combined for almost 49 sacks last season – junior defensive ends Daniel Gutierrez and Patrick Griu have emerged as capable compliments for nose guard Juan Carlos Saldivar, who has 10 tackles for loss.

Line play will be critical against Yorba Linda. The Mustangs like to run the ball and marched about 8 of 9 minutes for a first-quarter scoring drive last week in a 26–6 victory against Troy.

Keeping Manning off the field is the best way to slow him down. James Festini (6-3, 200) was a fill-in quarterback for the Mustangs last season in a 38–7 loss against the Cougars but is now Yorba Linda’s top running back.

Yorba Linda coach Jeff Bailey said the Cougars represent a challenge and an opportunity for growth as he team moves closer to a Crestview League ruled by Villa Park.

“I think we’re going to keep getting better,” he said.