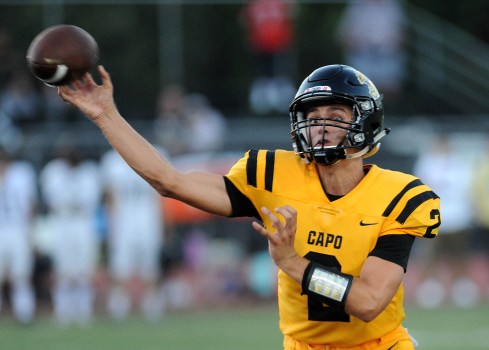 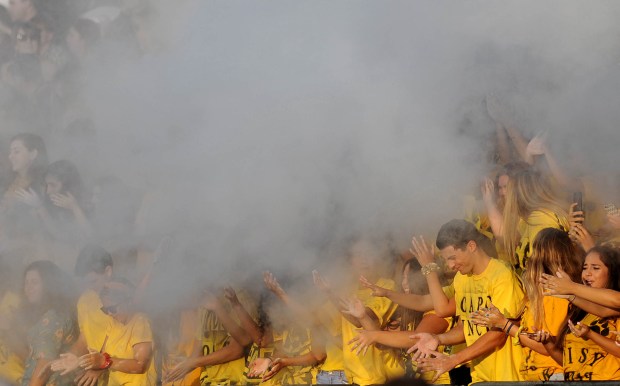 “Nathan is a special football player and special kid,” Capo Valley coach Ernie Bucher said. “He is in full control and we are lucky to have him.”

On the Cougars’ second possession, Dylan Flynn had a 71-yard run to put Capo in the red zone. On the next play, Manning found Meyer in the end zone for a 22-yard touchdown to put the Cougars ahead 7-0.

Tommy Dickman returned a Tustin punt to the 6-yard line to set up a Flynn rushing touchdown. On the ensuing Capo possession, Manning threw a touchdown pass to Haley to give the Cougars a 21-7 lead heading into halftime.

The defense for Capo Valley (1-0) had no problems with the new-look Tustin offense. The Cougars held Tustin to just 85 yards passing and only two red zone appearances

“Defensively we held the line of scrimmage, which is really nice because that is a physical football team,” Bucher said. “We were able to put them in some really tough spots.”

Manning and Haley connected for a second touchdown midway through the third quarter to extend the Cougars’ lead to 21. After a defensive stop, Manning threw a 72-yard touchdown to Blake Morgan to put Capo ahead 35-7 entering the fourth quarter.

Tustin (0-1) debuted a spread offense Friday, but found most of its success running the ball. Mike Mierez and Girard Bell rushed for 88 and 73 yards, respectively. Tiller’s quarterback Romario Alvarez attempted 22 passes Friday, which is a big jump from the eight passes per game Tustin attempted in 2017.

Capo Valley will host La Mirada next week before playing three consecutive games on the road. The Cougars have won 24 of their last 26 games and play in the competitive South Coast League this season.

“The league is five games away, we have La Mirada next,” Bucher said. “We know the challenge facing us down the road. But we focused on Tustin this week, we’ll focus on La Mirada now.”