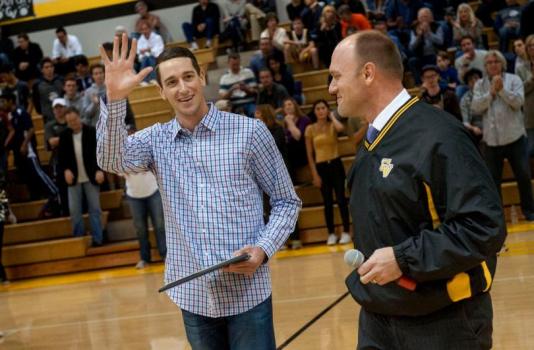 Phil Sklar described Chicago Cubs’ pitcher Kyle Hendricks as a man with a good head on his shoulders.

It’s only ironic that Sklar, the co-founder and CEO of the National Bobblehead Hall of Fame and Museum, would want to create a likeness that has Hendricks’ head on a spring.

Sklar’s company has manufactured 500 Kyle Hendricks bobblehead dolls in which the star right-hander is donning his high school No. 12 jersey and ball cap from Capistrano Valley High School.

A portion of the proceeds from the sale of the bobblehead dolls will benefit the Capistrano Valley High School athletic department. The bobbleheads are on sale online already and will be available through the school starting Friday, Jan. 26.

“He had a great four years at Capo Valley,” said John Hendricks, Kyle’s father. “They treated him well and I think it’s good to give back. It’s a great program over there with a lot of enthusiasm and it’s good to show the kids that anything can happen if you work hard.”

John Hendricks and Sklar met by chance at a Cubs convention three years ago, before the start of Kyle Hendricks’ rookie season in the major leagues. John Hendricks had no idea he and Sklar would be in contact again regarding a bobblehead.

Sklar got the idea after producing a Ben Zobrist bobblehead with his Eureka High School jersey, which ended up selling so well they had to make a second batch with a different-colored jersey.

“We reached out to several high schools and pitched the idea,” Sklar said. “They were receptive to the idea and liked it to support the athletic department. We think it’s a great way to bring pride to the school and the community.”

The community certainly backed Kyle Hendricks while he and the Chicago Cubs were playing for the 2016 World Series. Hendricks started Game 7, which the Cubs won in extra innings to erase a 108-year championship drought.

Sklar reached out to Addison with the bobblehead idea in May or June of 2017, Addison said. Not long after, Addison sent photos of the specific jersey worn during Hendricks’ tenure on varsity, as well as a photo of Hendricks in high school so Sklar’s team could work on the molds.

“It was a cool idea that came our way,” Addison said. “We’re just trying to continue to promote that this is a special place to be and celebrate (Kyle Hendrick’s) accomplishment.”

The bobbleheads sell for $25. Capistrano Valley High School’s athletic department will receive a little more than $10 per bobblehead sold through one of the school’s programs. Bobbleheads purchased through the website will result in a $5 donation to the school.

“He’s the most humble star athlete I’ve ever met,” Addison said, adding that he became the athletic director the summer after Hendricks graduated. “If you met him, you’d never know he won the World Series, or pitched in a Game 7, was the ERA leader and a Cy Young finalist. The great thing about him is he’s so even-keeled, humble and nice to be around.”

For John Hendricks, the bobblehead is another item to add to the growing collection of memorabilia for his son.

Included in that collection is a copy of Cubs broadcaster Pat Hughes’ scoresheet for Game 7, in which Hendricks pitched 4 2/3 innings.

“I like to keep all that stuff,” John Hendricks said. “To have a kid come from where he’s come from – he’s always had to prove himself – to have this happen is amazing, but he hasn’t changed a lick and he keeps working hard. It’s pretty amazing to pitch in what is probably one of the biggest games in baseball history. It’s a very humbling thing.”

Capistrano Valley has another legend worth honoring in Bob Zamora, who has coached the Cougars to six CIF-SS championships and will be coaching the varsity team for his 41st season, starting in late February.

There is no word yet on whether his bobblehead is coming.