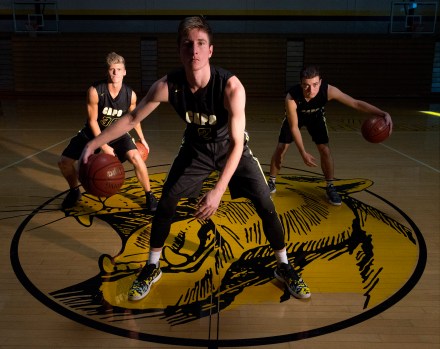 Nick Draper, pictured from left, “leads by example and is truly the coach on the floor,” Brian Mulligan, head coach, says adding Dawson Baker is the “craftiest athlete I’ve ever coached” and Nik Lipovic “cares more about being good than anyone and his hard work shows.” The Capistrano Valley players are a strong team. Photographed at Capistrano Valley High School on Monday, Nov. 20, 2017 (Photo by Cindy Yamanaka, Orange County Register/SCNG)

1. Mater Dei: Even with the departure of 7-foot-3 star center Bol Bol, and guard PJ Fuller’s return to Seattle without having played a game for the Monarchs, this team is in its usual position at the top of the county’s preseason top 10. Mater Dei (33-3 overall last year) has the talent to be No. 1 at the end of the season, too. Spencer Freedman, a 6-1 senior point guard who signed with Harvard and averaged 15 points a game last season, and senior forwards Harrison Butler (6-6, 9 ppg last season) and Michael Wang (6-10, 10 ppg) lead a deep and talented group for Coach Gary McKnight, who entered the season with a record of 1,082-98.

2. Santa Margarita: This could be the best Eagles team in several years. They bring back three top players from last year’s team that went 21-9: 6-8 senior forward Jordan Guest (9 ppg) and 6-7 junior forward Jake Kyman (14 ppg). Senior point guard Pearson Parker had surgery to repair a torn labral on his hip and his return is uncertain. Santa Margarita plays a challenging schedule, including two games against Mater Dei in the Trinity League, so don’t be surprised if they have more losses than teams ranked below them this season.

3. Capistrano Valley: The Cougars return plenty of standouts from last year’s team that won the CIF-SS Division 2A championship. Senior guard Dawson Baker, who can score in a number of ways, averaged 22 points a game last season and is going to be among the county’s scoring leaders again this season. Also returning are guard Nick Lipovic (11 ppg) and forward Grayson Beeman (11 ppg).

5. Villa Park: One of the county’s top college prospects is Villa Park 6-7 junior guard Julien Franklin. To get the ball in his hands as much as possible, Franklin will be asked to play point guard for the Spartans. Also back is 6-4 senior forward Matt Lanzone and added to the team is Maxx Hazely, a 6-9 senior forward who transferred from El Toro.

6. Orange Lutheran: The Lancers (11-17) lost some offensive firepower to graduation but most of last season’s starters return. Cade Potter (9 ppg) and Josh Griffin (10 ppg) could be ready for outstanding junior seasons. This team won’t finish below .500.

7. Canyon: Like Orange Lutheran, this will be one of the more improved teams in county basketball. AJ Perry, a super-quick 5-8 guard, was All-Crestview League last season when he averaged 16 points and made 79 3-pointers. Lucas Holden, a 6-7 senior center, averaged nine points and six rebounds last season when the Comanches went 16-12.

8. Edison: The Chargers, 23-5 last season, lost a large amount of points production to graduation. But their usual athleticism is intact with the return of 6-2 senior guard David Atencio (8 ppg) and 6-8 senior center Josh Phillips (6 ppg), who is one of the county’s better shot blockers. Last season Edison shared the Sunset League championship with Los Alamitos and is a league-title contender again.

9. Crean Lutheran: The Saints, who won the Academy League championship last year and finished 23-7 overall, caught some attention during fall ball when they beat Santa Margarita. It will be a youngish team, but a talented one. Jake Conerty and Isaiah Johnson could be two of the top sophomores in the county.