Fritts was the CIF State champion at 235 pounds 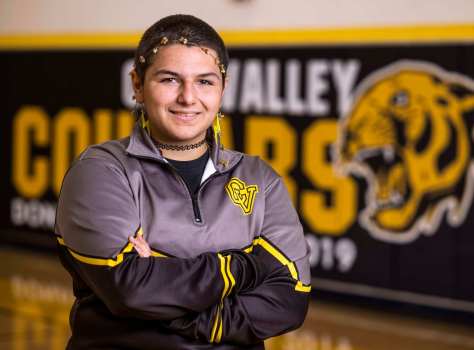 GIRLS WRESTLER OF THE YEAR

Neila Fritts had a way to get what she wanted if someone was in her way.

The way was a move called “The Freight Train Double.”

“One of my favorite things to do,” she said, “is kind of run right at the other girl and it almost always works.”

It worked enough enough to make Fritts, a senior at Capistrano Valley, the Register’s Orange County girls wrestler of the year for the 2021-22 season.

Fritts freight-trained her way to victory in just about everything she tried to do. She was CIF State champion at 235 pounds and also was CIF Southern Section Masters champion.

Fritts finished the season with a 38-1 record. Thirty-one of her wins were by pin.

Her one loss was to El Cajon Valley’s Valeria Rocha, who Fritts beat later in the season in the CIF State semifinals.

She ranks that win as the highlight of her season.

“I’m never going to forget my semifinals match at state,” Fritts said, “beating a wrestler I lost to earlier in the season.”

Seeded third in her division at the state meet, Fritts did not give up a point over all five rounds. She defeated top-seeded Annika Miles of Elk Grove in the final.

Fritts decided late in her freshman year to give wrestling a try. She soon found a home in the demanding sport.

“I made a lot of friends in the wrestling community,” Fritts said. “And not just on my team but all over the area. There’s a mutual respect and understanding.”

“She just doesn’t quit and she’s never afraid,” Shackleford said. “Sometimes the bigger kids in wrestling are afraid to make a shoot move and get underneath kids.”

And as for that Freight Train move …

“She puts her head right into the other kid’s abdomen and runs over them like a train,” Shackleford said.

The move took Fritts to a state championship and recognition as the county’s best in girls wrestling.