Neila Fritts has participated in sports since early childhood.

But when Fritts stepped on the wrestling mat for the first time as a sophomore, the other sports became a memory.

Grappling against the state’s best wrestlers, Fritts emerged as the state champion at 235 pounds at the CIF State Wrestling Championships held Feb. 24-26 at Mechanics Bank Arena in Bakersfield.

In the championship match, Fritts earned a thrilling 1-0 victory over top-seed Annika Miles of Elk Grove with an escape in the final minute.

“I went into (the match) with the plan of not doing anything on impulse,” Fritts said. “I’m not going to rush, even if I have to win 1-0.” 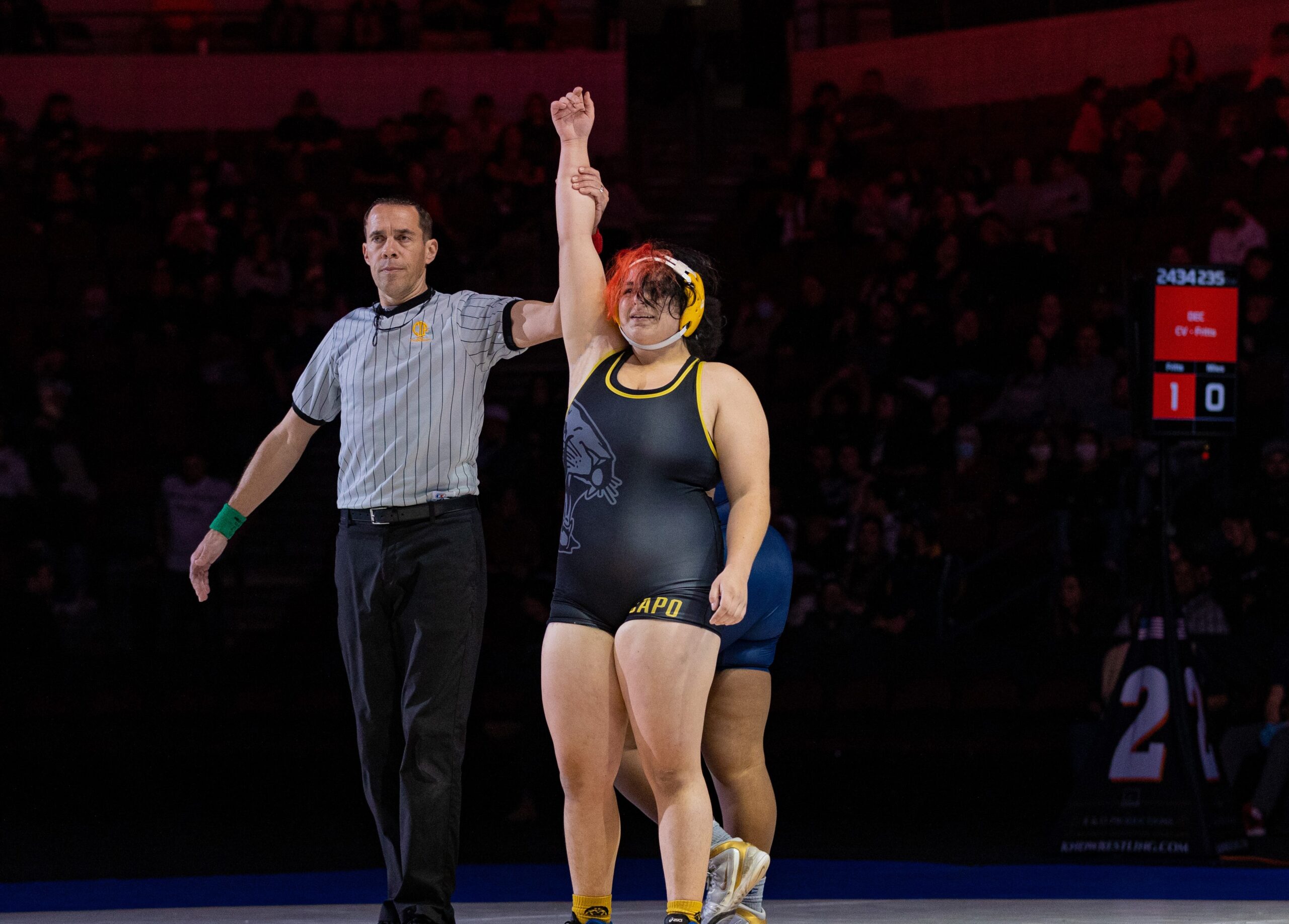 Fritts only gave up a total of three points in 14 postseason matches through league, CIF sectional, Masters, and state championships rounds. Fritts finished the season with a record of 38-1, notching 32 of those victories by pins.

“It didn’t feel real at first,” Fritts said of standing on the podium and being crowned the best school wrestler in the state. “I never expected going into wrestling that I would be really good or be some sort of champion. It took a minute to sink in.”

Cougars coach Brian Shackleford saw Fritts’ potential from the beginning.  Fritts was quiet, but determined, said Shackleford, who is head coach of the Cougars’ girls team.

“She was good right away and worked hard and kept coming back and did everything we asked,” Shackleford said. “She was tenacious and mixed it up right away.”

Learning the moves was tough at first, said Fritts, who weighed 180 pounds but was competing at 189.

As the season progressed, Shackleford knew Fritts had a legitimate shot to go deep into the postseason.

The sophomore standout, in fact, made it to the Masters tournament against some of the toughest wrestlers in Southern California, and came one match short of moving on to state. 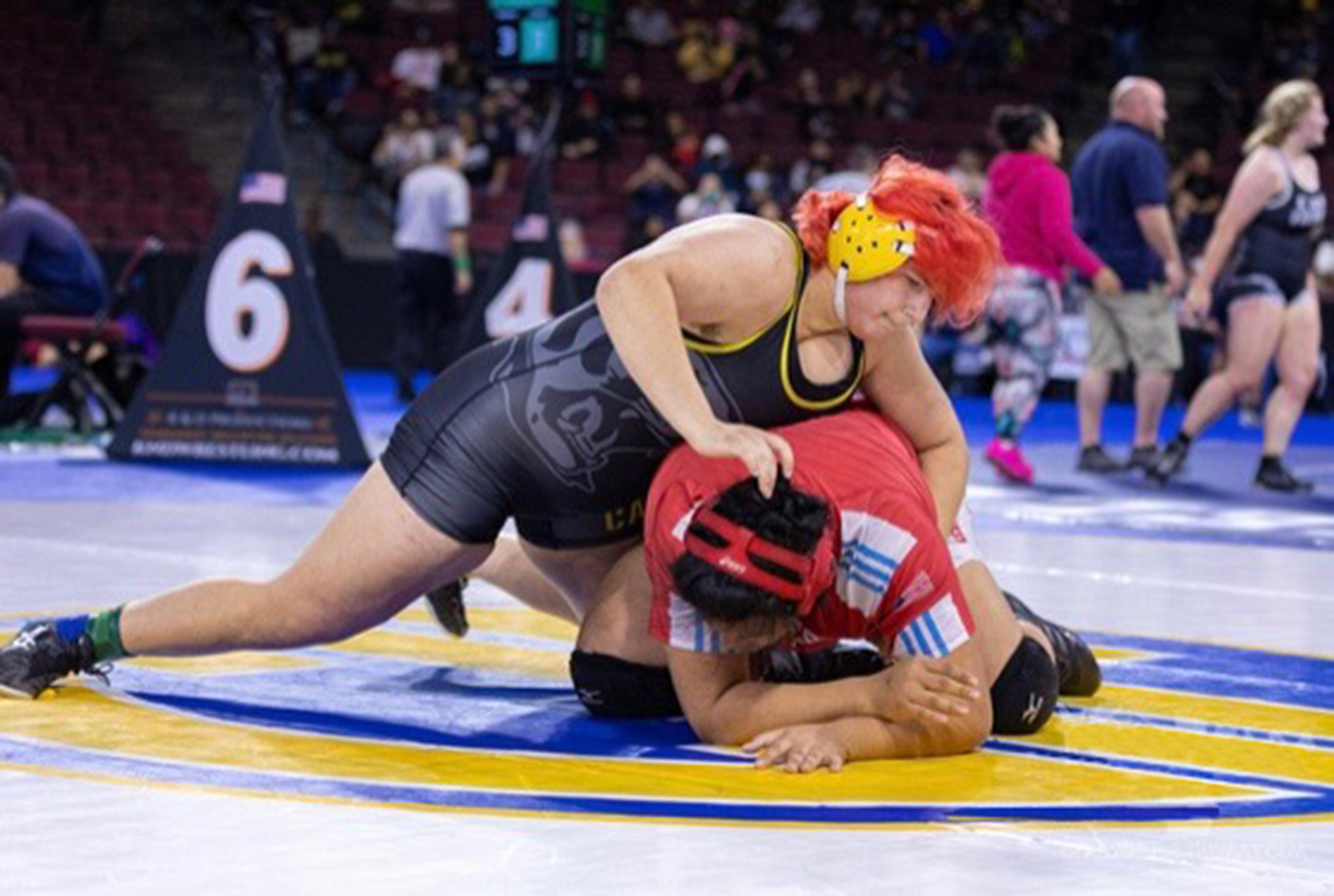 The 2021 season was marred by the coronavirus pandemic, with nearly all postseason tournaments being canceled. Dual matches still took place and Fritts won every one of those, pinning all but one opponent.

As a senior competing in the 235-pound class, Fritts also grappled against much heavier opponents.

The high school season is finished, but Fritts’ wrestling career is not. Fritts wants to wrestle in college and recruiters have already been reaching out, Shackleford said.

Another one of Fritts’ passions is singing, and the senior will spend the last few months of high school performing in the Capistrano Valley High School choir.

Fritts is also a gifted artist whose favorite medium is ink. So, becoming a tattoo artist is also a potential goal.

There is time to figure all that out, so Fritts is taking a break from the sport for a few months.

The state champion plans to backpack throughout Europe alone over the summer, visiting family in France, England, and Germany along the way.

Fritts’ long-term goal on the mat is to become a national champion.

That might be a lofty goal, but one thing that was obvious the first time the state champion stepped on a wrestling mat, is that Fritts loves a challenge.