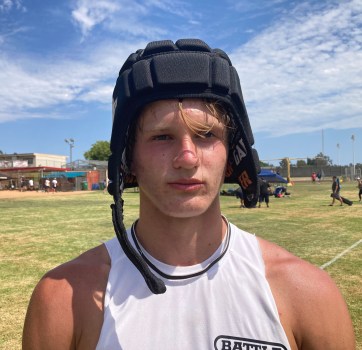 If there’s a dynamic duo ready.

The reigning Sea View League champion beat Long Beach Poly, Pacifica and St. Bonaventure to take second in Group B to Servite and reach the Gold playoff bracket. Capistrano Valley fell again to the Friars in the quarterfinals before falling 22-16 to Norco in a spirited consolation semifinal.

“Pretty good day,” Cougars coach Sean Curtis said. “We’ve really only been in practice for 3 1/2 weeks now so we’re hoping to stay on this trajectory.”

The effort continued Kukuk’s impressive transformation during this short offseason caused by the pandemic. As a sophomore in the spring, he earned all-league honors at linebacker while the strong-armed Moussiaux passed for nearly 1,800 yards and 20 TDs in just five games.

In preparation for the South County tournament, Kukuk led the Cougars to a sweep of Mission Viejo, Santa Margarita and JSerra in a four-way passing event at Capistrano Valley. Curtis said Kukuk will be a dual threat quarterback once the pads come on in the fall.

Benedix (6-1, 185) was the No. 1 option against Norco, showcasing strong hands, route running and athleticism. He was the sixth man on the Cougars’ basketball team that reached the CIF-SS Division 1 finals in early June.

“(Kukuk) is really managing the offense well but we put it on our receivers now,” Curtis said. “Dart really elevated our receiver group last year and we think our receivers are going to elevate the quarterback play this year.”

Last season, Benedix teamed with Justin Richardson and Taylor to led the Cougars’ receiving group with 40 catches for 499 yards and seven TDs.

“I think we have the three best receivers in the county,” Curtis said.

Capistrano Valley returns to tournament competition this Saturday at Marina.