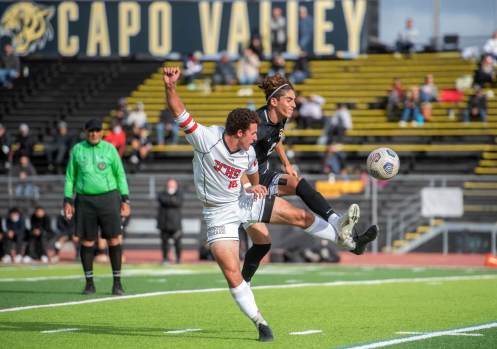 San Clemente’s Aiden Giabobello, left, and Capistrano Valley’s Zaid Olumee battle for a ball in the air during a South Coast League game between the two teams on Wednesday, April 21, 2021. (Photo by Jeff Antenore, Contributing Photographer)

MISSION VIEJO — A goal by Capistrano Valley’s Nima Ahmari in the 25th minute wound up being the only score that the Cougars needed in a 1-0 victory over San Clemente in a key South Coast League boys soccer match Wednesday at Capistrano Valley High School.

The Cougars (9-0-4, 4-0), who are ranked No. 7 in Division 1 of the CIF Southern Section, stayed unbeaten through the first round of league play and control their own fate going into the final four league matches.

Capistrano Valley’s victory is also its first against San Clemente since the 2017-18 season.

The teams will meet again in the final match of the regular season on May 5 in San Clemente.

“It’s massive,” Cougars coach Jason Surrell said of the victory. “They are the team to beat. They are No. 5 for a reason. Maybe in the last 10 years we may have beaten them three times.”

Early in the match, San Clemente had three scoring chances on one possession.

Two hard shots were blocked by Cougars defenders and a third was stopped by goalkeeper Ivan Hernandez.

About a minute after a free kick from Capistrano Valley’s Zaid Olumee sailed wide of the goal, the Cougars got another opportunity and this time they converted.

Tyler Canepa led Ahmari with a perfect pass forward, which Ahmari kicked into the right side of the goal.

“He got that tight angle and he gave that little ball in the middle and I just hit it with my left foot,” Ahmari said.

For the first 15 minutes of the second half, the Cougars did a good job of sealing the middle of the field and not allowing the Tritons to penetrate.

Then the Tritons started creating opportunities but just couldn’t convert.

In the 67th minute, a kick from the Tritons’ Nelson Tabarez off a wide angle went high and wide of the net

Minutes later, Tabarez’s free kick from 30 yards out was headed away from the goal by a Cougars defender.