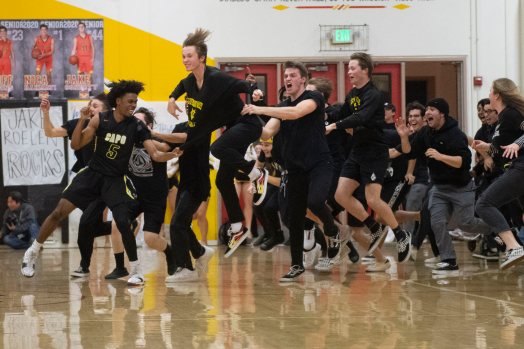 “A lot of times when Capo and Mission play each other,” said Capistrano Valley’s Brian Mulligan, who is in his 25th season as the team’s head coach, “stuff like this happens and then it gets really weird down the stretch. I’ve been involved in way too many 41-40s and 39-38s.”

It was the league opener for Capistrano Valley. The Cougars, No. 3 in the Orange County top 25, are 16-1 overall. No. 7 Mission Viejo (16-3) beat Trabuco Hills in its league opener Monday for its 10th win in a row.

Capistrano Valley had a 12-point lead in the third quarter. The Diablos scored 10 of the quarter’s final 12 points to trail the Cougars 36-33 going into the fourth quarter.

Mission Viejo took its first lead at 38-36 with 5:16 remaining on Jake Conerty’s two free throws. A free throw by the Diablos’ Griff Higgins made it 39-36.

Capistrano Valley’s Brody Sumner made a game-tying 3-pointer with 3:04 to go. Nathan Hewitt put Mission Viejo back on top 40-39 with a free throw with 1:14 left.

After a series of timeouts and missed shots by both teams, Capistrano Valley came up with a loose ball and got it to Roberts for the winning layup with 15 seconds remaining.

Mission Viejo’s following possession yielded a couple of make-able shots that did not fall as time expired.

Capo Valley holds on and takes the one point victory over Mission Viejo as the Capo Valley Cage storms the court! What a finish!#ocvfans @ocvarsity @CVHSCAGE @CapoValleyHS

Sumner opened the game with a 3 to give the Cougars a lead they would not relinquish until the fourth quarter. They had a 14-5 advantage at the end of the first quarter and were ahead 24-14 at halftime.