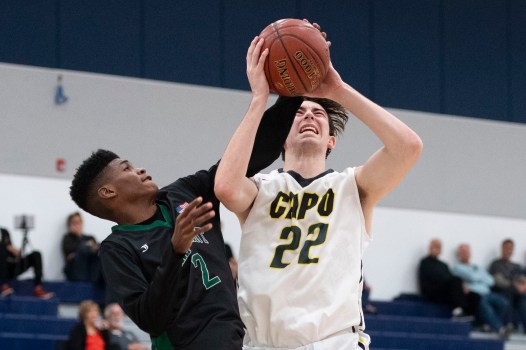 LA HABRA — A 3-pointer by Zach Roberts helped Capistrano Valley overcome a six-point deficit with just over a minute left in the fourth quarter, as the sixth-ranked Cougars pulled out a 46-44 victory over No. 3 Fairmont Prep in pool play of the North Orange County Championships on Thursday night at Sonora High.

Capistrano Valley coach Brian Mulligan was impressed with his team’s resolve late in the game after struggling most of the contest against Fairmont’s 2-3 zone defense.

“We need more people to step up against teams like that,” Mulligan said. “They seemed willing to let us back in and we finally made some shots.”

The Huskies (5-1) were up 43-37 before Brody Sumner hit one of his three shots from beyond the arc in the fourth quarter to bring Capistrano Valley (7-0) within a point, 44-43. Sumner scored all nine of his points in the final quarter.

Fairmont Prep called a timeout after Sumer’s basket and then turned the ball over on the ensuing inbounds play.

Roberts did the rest. The senior guard drilled a 3-pointer from the right wing with under 10 seconds remaining to give the Cougars the lead, 46-44. Roberts finished with eight points, including a pair of fourth-quarter 3-pointers.

Huskies guard Atin Wright, a Cal State Northridge signee, finished with a game-high 13 points, but he was unable to convert in the frantic final seconds as his shot fell off the mark before the final buzzer. The Cougars players sprinted off the court in a jubilant celebration.

Conner Gleason led Capo Valley with 12 points, 10 in the first half, and Mulligan praised the crafty play of his point guard.

“He understands that he’s limited physically, but he’s so tough mentally,” Mulligan said. “His little scoops in the lane really kept us around for a long time.”

Chol Deng and Papa Cisse each had 10 points for Fairmont Prep, and Kristian Jemerson had nine points on three 3-pointers.