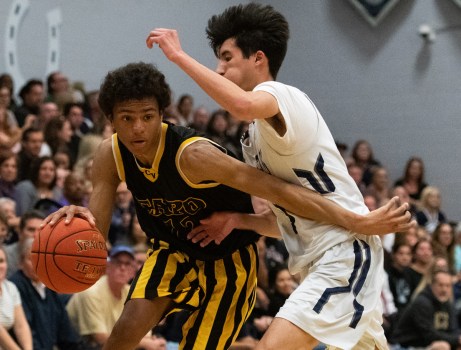 The Cougars boys basketball team won the season-opening Jim Harris Classic tournament championship two weeks ago. They improved to 5-0 with a 64-27 win over Esperanza on Monday in the first round of pool play for the North Orange County Championships.

He broke his leg in a 2018 summer league game at Mission Viejo when he slammed into a wall.

“It was gruesome,” said Capistrano Valley coach Brian Mulligan. “He came back last year after the Christmas break, but he was nothing like he is now. Now, he’s at about 90 percent recovered.”

Redfield is an all-around contributor.

“He defends,” Mulligan said, “he scores and as a point guard gets the ball to everybody. He’s super unselfish.”

Capistrano Valley often has two bona fide point guards on the court. Conner Gleason, a 5-10 junior, is the other.

“Both are really bright players,” Mulligan said. “Having two point guards on the court at the same time is a luxury we’ve never really had before.”