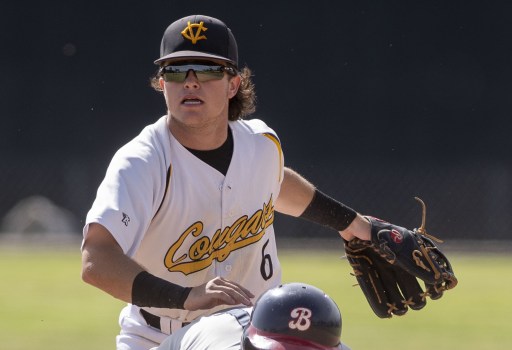 Capistrano Valley’s Chad Call looks to see if his throw completes a double play in the Cougars’ win over Beckman in the first round of the CIF-SS Division 1 playoffs. (Photo by Paul Rodriguez, Contributing Photographer)

Chad Call, Capistrano Valley: He delivered a three-run double for the Cougars in their 8-5 win over Beckman in the first round of the CIF-Southern Section Division 1 playoffs. Call, a senior second baseman who signed with Cal State Northridge, also was involved in two double plays.

Casey Kudell, Irvine: He had five RBIs for the Vaqueros in their 8-3 win over Rancho Alamitos in a Division 4 first-round game. Kudel, a senior infielder, hit a single and a double.

Case Ostrom, San Juan Hills: In his first pitching start of the season Ostrom, a senior, threw a two-hitter in the Stallions’ 3-1 win over second-seeded Marina in the first round of the CIF-Southern Section Division 3 playoffs.