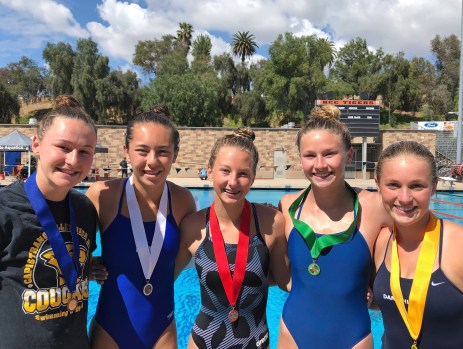 They were especially abundant after dives by Markie Hopkins of Capistrano Valley, Brooke Earley of Aliso Niguel, Alexandra Barnes of Santa Margarita and defending Division 1 and state champion Savannah Stocker of El Toro.

The foursome accounted for an astounding 23 scores of 10.0, leaving just one option at Riverside City College: compete.

“I liked that the scores were high and everyone was pushing each other to do their best,” Hopkins said.

Down to the very last dive.

The Northwestern-bound Hopkins scored five 8.0s in the 11th and final round on a difficult forward 1 1/2 somersault with two twists on the 3-meter springboard to edge Earley by 2.2 points to capture her second title in three seasons.

“That’s one of my favorite dives and one that I know I can hit,” said Hopkins, who trains with SoCal Divers at Fullerton College. “I knew (the other girls) were doing really well. I was really proud of them, so I was just tried to do my best. … They definitely put the pressure on.”

Hopkins, the most consistent diver Tuesday, finished with a score of 582.10 points to edge Earley, a sophomore, at 579.90.

Santa Margarita’s Nicholas Leavell, a former trampoline athlete, won the boys Division 1 boys title, a first for a boy at the school. The Michigan-bound senior scored a school-record 599.55 points to outdistance Hopkins’ sophomore brother, Cody, at 551.20.

“It was a good day for me,” said Leavell, who trains with the Mission Viejo Nadadores. “I was just trying to relax and just do what I’ve been doing at practice. Sometimes I get a little anxious but today I was just more relaxed.”

As a sophomore, Hopkins upset teammate and three-time defending champion Cami Hidalgo for the Division 1 crown. She entered Tuesday coming off regional titles on 1- and 3-meter last weekend in Mission Viejo.

She said she likely won’t dive in Saturday’s qualifier for the CIF State meet.